One look at this plant and it’s easy to see where the old-fashioned Bleeding Heart (Dicentra spectabilis) got its name. The pillow-like flower is heart shaped with a single dangling pendulous drop. Bleeding Hearts are shade loving woodland plants that bloom in the cool of spring. Although they stay in bloom for several weeks, the plants may disappear for the rest of the summer, if planted in too much sun or heat.
Latin Name:
Dicentra spectabilis
Common Name(s): 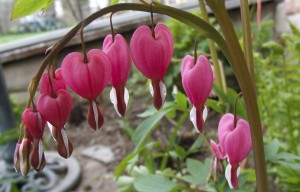 Bleeding Heart
USDA Hardiness Zones:
Hardiness Zones: 2 – 9
Exposure:
Partial Shade
Mature Size:
Height: 24-36 in. (60-90 cm)
Width: 18-30 in. (45-76 cm)
Bloom Period
Late Spring, Early Summer.
The plant can be ephemeral and disappear when the weather warms. It regrows in fall or the following spring.
The Fringed-leaf varieties will repeat bloom throughout the summer.
Flowers: Racemes of pink and/or white flowers.
Foliage: Heavily lobed to lacy and fern-like. 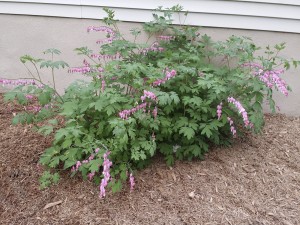 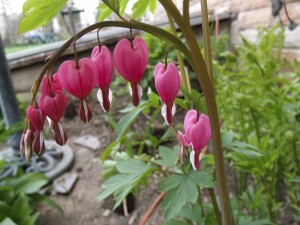 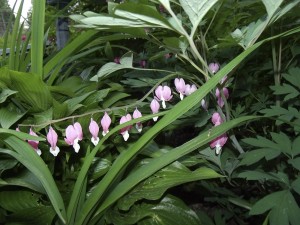 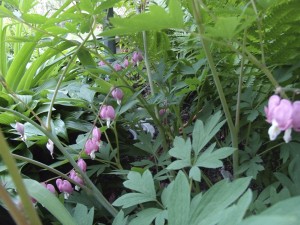 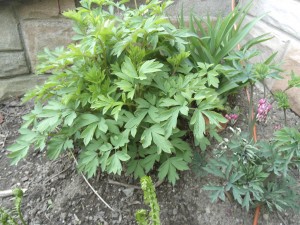 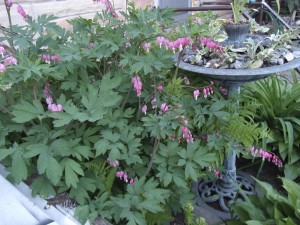 Bleeding Heart usually blooms about the same time as Pulmonaria, Brunnera and Hellebores, all of which make a wonderful woodland cottage affect. Bleeding Heart will stay in bloom for several weeks, bu the foliage tends to go downhill after flowering. Plan to have late emerging plants nearby, to fill in the hole. Coral Bells, Ferns, Foam Flower, Hosta and Monkshood are good companions.
Growing Tips:
Soil: Bleeding Hearts prefer a rich, moist soil, but are not particular about soil pH. Bleeding Hearts thrive in moist, humusy rich, well-drained soil in partial to full shade. In cooler climates, Bleeding Hearts will tolerate full sun if they are given enough moisture. In warm climates, they must be provided with partial to full shade. 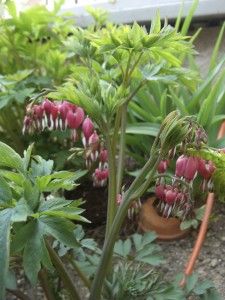 Dicentra spectabilis plants will tolerate slightly alkaline soil. Add lots of compost, humus, or peat moss to the soil at planting time to enhance its water retention capabilities.
Propagating: Bleeding Hearts can be started from seed, division, cutting or seedling.
Divisions: It is very easy to divide Bleeding Heart plants. Dicentra spectabilis should be divided after flowering, so you don’t sacrifice bloom. The fringed-leaf varieties divide nicely early in spring, as they are emerging.
Seed: Bleeding Heart can also be started by seed or stem cuttings. Plants very often self-seed throughout your garden, although not to the point of being a nuisance. Sow seed outdoors in the fall; the seeds need a period of freezing temperatures. To start seed indoors , sow fresh seeds in a moistened growing medium, then freeze them for six weeks. After the freezing period, move them to an area where you can maintain a temperature in the growing medium of 55°-60° until germination, which takes anywhere from 30-50 days. Grow them in regular seedling conditions.
Maintenance:
Bleeding Hearts require very little maintenance. Pruning: No pruning or deadheading is required of Dicentra spectabilis, since it won’t bloom again. Leave the flowers, if you want it to go to seed. You can trim back the foliage when it starts to turn ugly. Fringed-leaf varieties will eventually get a ragged looking and can be sheared back to their basal growth. They will re-leaf and rebloom.
Feeding: Bleeding Heart is not a heavy feeder, so when to fertilize depends on the quality of your soil. If you have rich, organic soil that is amended every year, you won’t have to feed at all. Bleeding Hearts are woodland plants and mine do especially well with a top dressing of leaf mold.
Watering: Keep plants well watered throughout the summer, especially in warmer weather. Even then, they may be ephemeral and disappear until the fall or next spring. If you’ve recently planted your Bleeding Heart, it would be wise to mark the spot, so you don’t accidently dig in the area while your Bleeding Heart is dormant. Western Bleeding Heart is a little more drought tolerant than the other species, but it’s best to treat them all as woodland plants and provide a moist, but not wet, environment.
Problems: The biggest foe of Bleeding Heart is summer heat. Gardeners in warmer zones will have a tougher time establishing their plants than those in the colder zones.
Leaves are susceptible to leaf spot. The easiest solution is to shear back the affected foliage.
Although Bleeding Heart likes a moist soil, it can’t tolerate heavy, wet soil and may get root rot if left with wet feet too long.

Read a poem by “mary oliver” about this Old-Fashioned Plant

Service you can count on.