Technically speaking, aeration is the naturally occurring process of air exchange between the soil and its surrounding atmosphere. Practically speaking, aeration is the process of mechanically removing small plugs of thatch and soil from the lawn to improve natural soil aeration. It’s commonly called “core aeration” in the lawn service industry, and you may have heard of it as soil cultivation (coring, spiking and slicing). Most homeowners simply call it aeration.
Core aeration can help make your lawn healthier and reduce its maintenance requirements through these means:

In most home lawns, fertile topsoil may have been removed or buried during excavation of the basement or footings, forcing grass to grow in subsoil that is more compact, higher in clay content and less likely to sustain a healthy lawn. Walking, playing and mowing will compact soil and stress lawns. Raindrops and irrigation further compact the soil, reducing large air spaces where roots readily grow. Compaction is greater on heavy clay soils than on sandy soils, and it is greatest in the upper 1 to 1 1/2 inches of soil. Aeration can help relieve soil compaction, allowing your grass to grow deeper roots and make better use of water and fertilizer.

Most home lawns are subject to thatch accumulation. Left unmanaged, it impedes water, fertilizer and pesticide effectiveness. Core aeration combines soil with the thatch debris, so soil organisms are better able to break down the thatch and reduce its accumulation.

If you have cool season turfgrass such as Kentucky bluegrass and perennial ryegrass, both spring and fall are ideal times to aerate. In spring, aerate between March and May. Perform fall aeration between August and November. Aeration before or at the time of late season fertilization enhances root growth and improves spring greenup and growth. 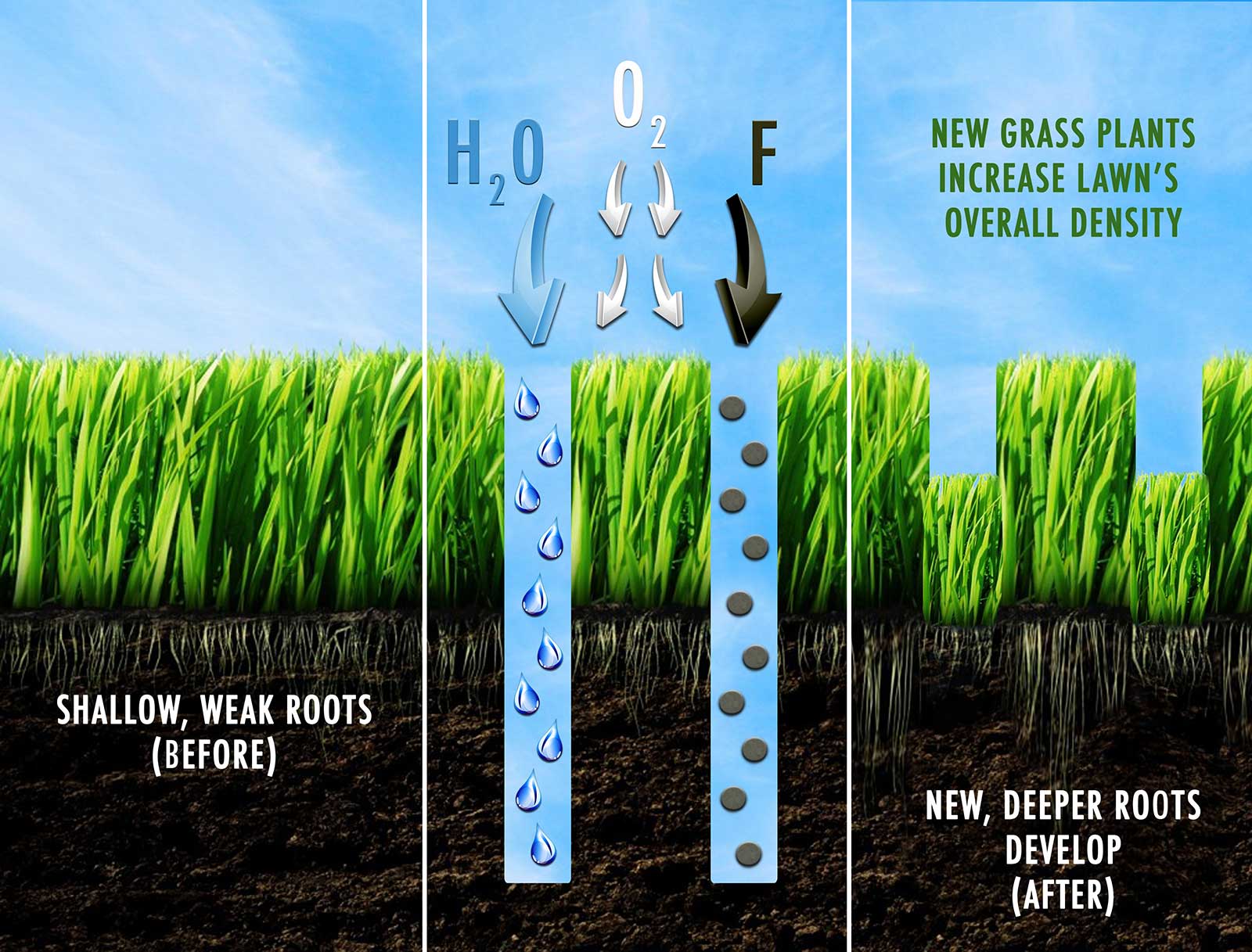 Regular aerating with lawn aerators helps keep your lawn green and healthy. It allows water direct access the the root system and encourages deep root growth and thicker turf. As the roots grow deeper, lawns can stay green even if they are not watered as regularly. Aerating makes soil less compacted, thereby creating healthier roots, which are more resistant to drought, disease, traffic and high temperatures. The best Time to aerate is in the Spring and in the Fall. If you haven’t aerated in a while, you should aerated every year at least once for the first few years. Once your lawn has a healthy established turf, you may only need to aerate once every 3 years. You should also consider doing it more often if you soil is especially bad or it gets really hard.

An organic lawn requires aeration when the soil becomes compacted and the grass roots only reach one to two inches into the soil. A lawn that has heavy “thatch” (thatch is the layer of alive and dead grass between the green grass leaves up top and the dirt down below) is also an indication of compacted soil. Lawns that are rich in clay should be aerated more than sandy lawns but either way, aerating about once a year is a good idea. Once the lawn soil is aerated, your organic lawn will be much healthier, greener, and lush.

Almost Perfect Landscaping of Bergen County offers lawn aeration services for both residential and commercial property owners. We utilize a core aerator method. The holes a core aerator makes, allows the soil room for expansion. Core holes last a lot longer then those made by spikes. They also help to soften the soil. In addition, the holes help out with overseeding and fertilizing the cores on the surface mix with the soil on the surface also thickening the turf.

We offer exceptional service and competitive pricing to all our clientele. It is often easier to hirer a professional to do the job for you. Costs vary dependent upon the square footage of the area to be aerated. Almost Perfect lawn aeration services in bergen county. Someone explained compaction to me as the difference between living in a house with 10 foot ceilings and one with 5 foot ceilings. It’s harder to get around, there is less air and life becomes more difficult. It’s the same with plants. There is less air and water, your roots can’t grow and your neighbors (the earthworms) don’t visit and stay.

Most home lawns benefit from annual aeration. Heavily used lawns, or those growing on heavy clay or subsoils may need aeration twice a year. It’s best to aerate before you apply pre-emergence herbicides, rather than after. Aerating after a herbicide application can reduce the chemical barrier formed by the herbicide, allowing weeds to germinate. Applying fertilizer after aeration helps the lawn compete against weeds. Water the lawn after aeration, particularly in areas where drought and high temperatures are common.