My wife and I both relish italian cuisine, and I especially in the late fall / winter months savor a fresh bowl of soup on a cold winter’s day. And what better than a “tinge” of Sage to liven up any salad, soup, broth or dish. And talk 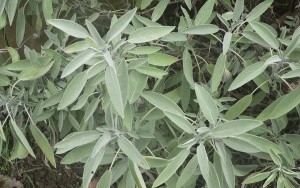 about a plant that is BENEFICIAL to your health. Oh my my. Sage tops the list…

Anway, more of that below. Two years ago I planted the herb sage in my herb garden area. I did not harvest any the first year, well maybe a leaf or two, because it is best to establish the plant the first year so it produces robust, green, oil laden leaf. And it did this year. Sage leaves are grayish green in color with a silvery bloom covering. They are lance-shaped and feature prominent veins running throughout. Sage has been held in high regard throughout history both for it culinary and medicinal properties.

I trimmed the stalks back towards the bottom of their growth and just kept cutting until i figured i had enough leaf to fill five trays in the “dehydrator” wherein i could efficiently dry them within three to four hours. Laying them out carefully so as not to overlap them, making sure i had a little leaf stem as possible, just pinch of the leaf. It takes a while but it’s rewarding. And oh the aroma just wafts up into the air. 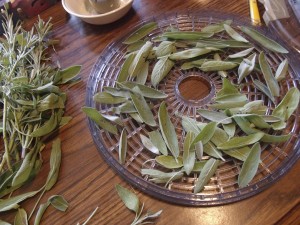 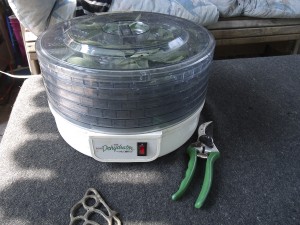 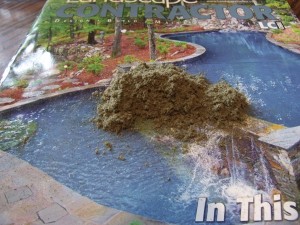 Once the leaves were dry and brittle I dumped them onto the kitchen table and crushed them in my hands to form smaller pieces. Next i filled up the coffee bean grinder and voila, I had ORGANIC POWDERED LEAF SAGE in a moment or two.

All in all after three run throughs of the dehydrator’s five trays, I ended up with about 5 – 6 ounces of it. Organic ground sage on the internet goes for about $5.00 for 1 1/2 ounces, or about $3.50 and ounce. Hey 25 bucks is 25 bucks. I’ll take it any day for little effort and rewarding work…..

And the health benefits of sage make it even more rewarding.

Like rosemary, its sister herb in the mint (Labitae) family, sage contains a variety of volatile oils, flavonoids (including apigenin, diosmetin, and luteolin), and phenolic acids, including the phenolic acid named after rosemary—rosmarinic acid.

Rosmarinic acid can be readily absorbed from the GI tract, and once inside the body, acts to reduce inflammatory responses by altering the concentrations of inflammatory messaging molecules (like leukotriene B4). The rosmarinic acid in sage and rosemary also functions as an antioxidant.

The leaves and stems of the sage plant also contain antioxidant enzymes, including SOD (superoxide dismutase) and peroxidase. When combined, these three components of sage—flavonoids, phenolic acids, and oxygen-handling enzymes—give it a unique capacity for stabilizing oxygen-related metabolism and preventing oxygen-based damage to the cells. 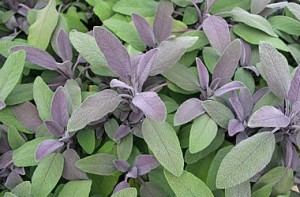 Increased intake of sage as a seasoning in food is recommended for persons with inflammatory conditions (like rheumatoid arthritis),as well as bronchial asthma, and atherosclerosis. The ability of sage to protect oils from oxidation has also led some companies to experiment with sage as a natural antioxidant additive to cooking oils that can extend shelf life and help avoid rancidity.

You’d be a wise sage to add the herb sage to your recipes. Not only does it have a soft, yet sweet savory flavor, but for millennia, it has also been prized for its health-promoting qualities. Its reputation as a panacea is even represented in its scientific name, Salvia officinalis, derived from the Latin word, salvere, which means “to be saved.”

Dried sage should be kept in a tightly sealed glass container in a cool, dark and dry place where it will keep fresh for about six months. Sage contains a variety of volatile oils, flavonoids (including apigenin, diosmetin, and luteolin), and phenolic acids, including the phenolic acid named after rosemary—rosmarinic acid. It is also an excellent source of vitamin K and a good source of vitamin A (in the form of provitamin A carotenoid phytonutrients).

So what’s for supper tonite???