Thank You "berry" much

for this delicious lunch…

My one crew was at a client’s property doing selective pruning and I knew there were a few varieties of “ilex” (holly) there along with an elderberry and bayberry. 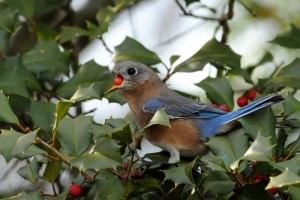 I have some also at home and during the winter months enjoy watchin the flurry of activity from all the birds feeding. So i wanted to make sure that these plants were very carefully pruned, if at all right now. They enjoy them too so I wanted to retain as much of these shrubs as possible. “just give those few a slight trim”

All of the deciduous trees will have shed all of their leaves. It’s not the cold that causes them their leaves to drop, but the threat of desiccation. When the ground freezes, a tree is unable draw more water through its roots. Because of the low humidity of the air, a tree would dry out if it retained its unprotected leaves. Thus, deciduous plants shed their leaves annually to conserve water.

So even though in the coming months most of the colors will be gone from my garden beds and the clients, these few shrubs, trees and hollys will stand out. They now take center stage with their bright green leaves and ripe red berries—food for my eyes so hungry for color.

The American holly is a native evergreen, a term for plants 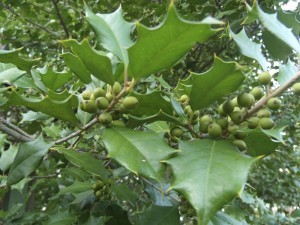 that do not lose their leaves at the end of the growing season. The leaves of the holly, like other evergreens, are covered with a thick, often waxy, layer that prevents the loss of water.

With regards to hollys. The most frequently asked question i get is
Q. I have a beautiful green holly tree, but it has no berries. Why not?
A. There are several possibilities. One is that it is a male tree. These have flowers, but do not set berries. The other is that it is a female tree, but there are no males of the same species around to pollinate it. Yet another is that the tree has a health problem relating either to nutrients or pests.

Birds consume the bright red berries on the holly bush, which are poisonous to other species, including humans. In addition to acting as a food source the evergreen holly tree also provides year round shelter and cover from predators.

Calories: High-calorie berries provide critical nutrients, especially when it’s cold out and other food is hard to find.

Antioxidants: Research indicates many species of berries for birds contain antioxidants that help them handle the stress of migration.

Shelter: Many berry bushes provide essential nesting habitat throughout the year while protecting birds from bad weather and predators.

One of the birds you most likely will see and be fascinated by is the Cedar Wax Wing.

The Cedar Waxwing is a silky, shiny collection 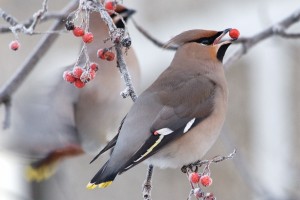 of brown, gray, and lemon-yellow, accented with a subdued crest, rakish black mask, and brilliant-red wax droplets on the wing feathers. In fall these birds gather by the hundreds to eat berries, filling the air with their high, thin, whistles. In summer you’re as likely to find them flitting about over rivers in pursuit of flying insects, where they show off dazzling aeronautics for a forest bird.

The Cedar Waxwing is a medium-sized, sleek bird with a large head, short neck, and short, wide bill. Waxwings have a crest that often lies flat and droops over the back of the head. The wings are broad and pointed, like a starling’s. The tail is fairly short and square-tipped.

Cedar Waxwings are pale brown on the head and chest fading to soft gray on the wings. The belly is pale yellow, and the tail is gray with a bright yellow tip. The face has a narrow black mask neatly outlined in white. The red waxy tips to the wing feathers are not always easy to see.

Interested in attracting avian wildlife to the garden. Here are some suggested plants to utilize within the garden and/or landscape to attract birds and wildlife:

Bayberry (Myrica).
While most warblers are spending the winter in Central and South America, flocks of the yellow-rumped species remain in the southern United States all winter long. Many species of bayberry, including wax myrtle, provide fruit for the warblers. In fact, the eastern subspecies of the yellow-rumped warbler is often referred to as the myrtle warbler.

Currant (Ribes).
Many currants produce fragrant flowers and abundant fruit. Except for a few species, the berries are largely unpalatable to people, but the birds will thank you for planting these treats in your backyard. A bonus: Hummingbirds are wild about the flowers.

Dogwood (Cornus).
Several species are native to North America, and over 40 kinds of birds have been documented eating their berries. One of my favorites is the gray catbird, whose long tail and stubby wings are perfectly suited for flying though dense dogwood thickets. The plant is available as either a small tree or a bush.

Elderberry (Sambucus).
A hit with many birds, from wrentits to flycatchers, purplish-blue elderberries grow in clusters. If you somehow can harvest the berries yourself before the birds devour them, they make a delicious pie filling, jam or syrup.

Holly (Ilex).
What’s more festive than holly’s bright-red berries clustered among dark-green leaves? Although the fruit can be mildly toxic and irritating to humans, birds seem to have no problem with it. Research suggests that the berries lose some of their toxicity after the first frost, which is when birds tend to chow down on them. Another thing to know about holly: It’s dioecious, meaning you need to have both male and female plants to ensure that 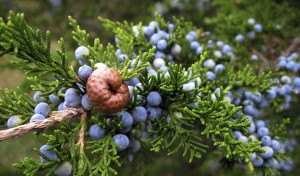 fruit will be produced.

Huckleberry (Gaylussacia).
A relative of the blueberry, huckleberry is equally popular with birds. While I prefer to enjoy it in ice cream form, the birds love it right off the bush.

Juniper (Juniperus).
Any of the juniper species can offer double benefits for birds, providing good cover and choice nesting locations as well as fruit. The berries are especially popular with the Townsend’s solitaire; while they’re less appealing to some other birds, they still offer valuable winter nutrients. And for the gardener, these hardy shrubs require little maintenance.

Raspberry (Rubus idaeus)
The dense patches provide excellent cover, and sometimes the birds refused to flush from the thicket as I picked a few treats for myself.

Serviceberry (Amelanchier).
Most of these species bloom early and then quickly yield berries for birds, including the vireos. It’s easy to find serviceberry shrubs. Some serviceberries are considered small-scale trees, but they don’t grow too large, so both tree and shrub work nicely in smaller landscapes.

Viburnum (Viburnum).
With around 150 different species, this is a versatile choice for your backyard berry patch. These shrubs can do well clumped as a hedgerow. They also make a good transition species at a forest’s edge. The berries are favorites of both birds and larger wildlife.

Plant any of these choices, and watch the show begin! A flock of waxwings can make short work of a berry buffet, while a northern mockingbird will vigorously defend a berry patch to hoard the pickings, enjoying them at a leisurely pace. Either way, when you plant berries for birds, you’ll have a front-row seat to some fascinating bird behavior all year long.

Thinking about adding a few of these to the landscape. Give us a call at 201-389-6979. Or check out our Reviews on Google and see what many others have said about our award winning landscape services.