Hardscaping and Landscaping in Teaneck NJ 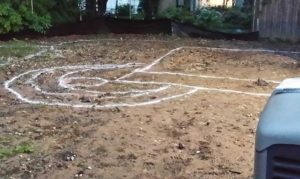 Every design starts with an initial consultation with the client. Their needs and wants are taken into consideration prioritized. Listening carefully to the client’s needs makes it easier for both parties to have a thorough understand and a pleasurable experience.

At this time a visual presentation is drawn on the surface of the ground dividing the property into areas of usage such as Paths, Patios, Vegetable Gardens, and Fire Pits, Lawn Areas, and Decorative areas to look at. Different elements combined together make the overall design simple yet elegant.

A blank slate such as this property makes it easier to separate the areas. Some houses already have a foot print that need existing materials to be moved in order to provide a more evenly flow from one area to another. This backyard had almost all the components of a true backyard paradise. As seen in this picture, all the areas where measured and denoted as per. Each area was connected to each other with much consideration. At this time it is easier to make changes prior to the actual install. The client can actually visualize areas and tweak them to their liking.

So what did we do? We’ll show you below…

Now the fun begins! Getting the materials into the site and placing them correctly can save both time and labor which transcends into dollars saved. The design begins to come alive at this stage.  Each area is installed from the beginning through the eyes of the designer and monitored all through the process with the project manager. This ensures all goes well, not to say that glitches do not come up.

The condition of the existing soil will determine what and how much we need. There are many different blends of soil to consider when planting because each plant has different needs. Some like water while some do not. The specific soil on this project was quite compacted with a sandy loam texture.  We decided to rototill an organic based product throughout the entire growing areas.

Plants were selected laid out and installed after the client gave the final OK. Within the corner bed that now has an arced natural flowing appearance and wraps around the corner towards the front we planted several masses of liriope muscari, heuchera with glossy leaf and delicate light colored flowers on stems, astilbes with their spires of pinks, red and white blossoms, hostas providing foliage and texture, gold cypress for year round color and hydrangeas along with some seasonal color annuals. A  raised garden area was installed, also doubling as a seating area when entertaining a large group of people. Within this raised bed we added several boxwood anchored with flowering hydrangea.  Next the patio was laid! We decided to use thermal Bluestone because of its many different textures and colors. Off the patio was a fire pit area to which the seats made out of natural logs from a recent tree cut down. Jersey shore stone made a great ground cover for the fire pit. Let’s face it! Most people light their fire pit only a few times per year. An expensive pit makes no sense. The fire pit we installed was a quality fire fit purchased through a reputable on line service.

Now getting into and out of the yard we continued the Bluestone right to the front of the house. The same jersey shore stone was installed between the walkway tying both areas together. We amended the soil in the beds beside the walkway; and taking the four (4) existing hosta that we removed before we started, we divided these and ended up with twenty-five hostas to incorporate. These we divided and planted alongside the walkway to the front of the residence within these two beds.

A simple log wall purchased from Lowes gave the garden areas another piece of Interest. Finally sod was installed making this back yard usable in a very short amount of time. Just ask how we can make your dreams come true.