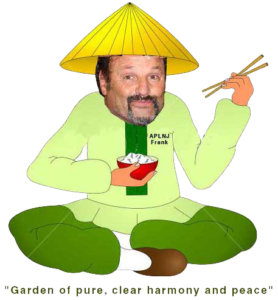 Some of the oldest gardens ever designed were built thousands of years ago in Japan. Many of them have stood the “test of time”. This client, desiring a “Japanese garden”, took it one step further by utilizing the aspects of a Japanese rock garden (枯山水 karesansui) or “dry landscape” garden.

These are often called a zen garden and within them you create a miniature stylized landscape through carefully composed arrangements of rocks, water features, moss, pruned trees and bushes, and uses gravel or sand that is raked to represent ripples in water.

This design was intended to guide visitors through circular and winding paths. These paths served to segregate the different areas. Stone symbolizes longevity and the forces of nature. While stone is a very decorative element it does not substitute the elegance of water. The images below show the initial layout, the plantings and the pathways and focal points within this serene setting.

Plants are often associated with moving thoughts and the universal forms of life. They are carefully arranged around the garden to serve as character and stability. The Japanese show a natural ability to interpret the charm of plants and flowers in order to express their joys and pains. Their communion with nature manifests itself through an elaborate symbolism and that is why their interest for the plant realm has become a real passion. A few of the most widely used are:

In springtime, the Japanese Garden is ablaze with the bright pinks, reds, purples and whites of rhododendron blossoms. These charming flowers, with their delicate petals, symbolize fragile and ephemeral beauty.

In summer, the flowers give way to the waxy and lustrous foliage of certain cultivars. The use of compact specimens makes it possible to create varying heights and depths, and the illusion of a miniature mountainous and wooded landscape.

In Japan, azaleas and their more delicate foliage are preferred to rhododendrons, since they are more tolerant of pruning.

The Japanese maple is much appreciated for its lacy leaves and magnificent autumn colours, making it a favourite in Japanese garden design.

The Japanese maples in this garden are taken indoors when winter comes, and brought back outdoors in spring, to spare them the rigours of our Montreal winters.

They are gradually being replaced with Amur maples, a hardier species. The Amur maples are allowed to grow naturally, without pruning, as is the practice with momiji in Japan.

In spring, the serviceberry is a charming sight, with its masses of white flowers. It is considered a symbol of youth in Japan.

In fall, it is remarkable for its gold and scarlet foliage and tiny blue berries.

Winter is the perfect backdrop for the silvery bark of the serviceberry, whose year-round attractions make it one of the stars of this garden.

Irises are important members of this garden. They flower from late May to mid-July, in soft tones of pink, blue and white.

Many species of iris are represented here, including Iris ensata or hana-shobu, remarkable for its huge flowers. The delicacy and graceful bearing of this plant are perfect examples of the quest for simple and refined beauty in Japanese art. Japanese Gardens are spacious, symbolizes renewal, calm, wonder, and continuity in the hereafter.

And now for the "masters" of this Garden Art

Ryoanji Temple (龍安寺, Ryōanji) is the site of Japan’s most famous rock garden 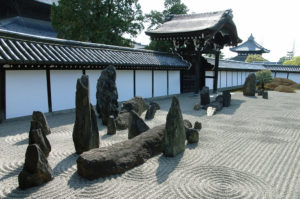 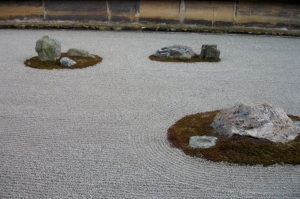 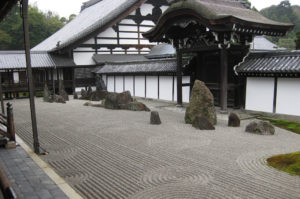 Originally an aristocrat’s villa during the Heian Period, the site was converted into a Zen temple in 1450 and belongs to the Myoshinji school of the Rinzai sect of Zen Buddhism, whose head temple stands just a kilometer to the south.

As for the history of Ryoanji’s famous rock garden, the facts are less certain. The garden’s date of construction is unknown and there are a number of speculations regarding its designer. The garden consists of a rectangular plot of pebbles surrounded by low earthen walls, with 15 rocks laid out in small groups on patches of moss. An interesting feature of the garden’s design is that from any vantage point at least one of the rocks is always hidden from the viewer.