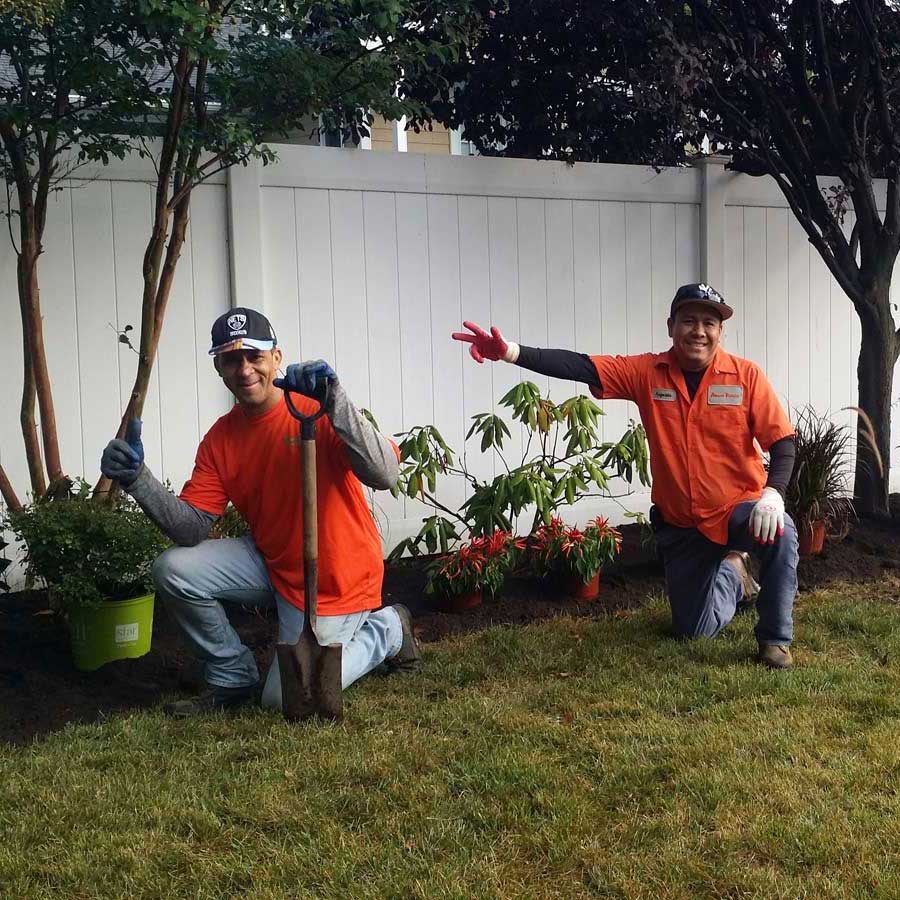 Lots of time or too many times we tend to complicate things. As stated by famed jazz musician, Charles Mingus “Making the simple complicated is commonplace; making the complicated simple, awesomely simple, that’s creativity.”

Ok, with that being said, how simple can it be? Small areas can be transformed into something very beautiful with just a little thought. I am not particularly fond about white fences however I do realize that they serve a purpose in some instances. This small area which is just off our client’s patio looked rather boring and uninteresting. The home faced south which meant the backyard received enough sun for many beautiful flowering plants.

In the same way that rhythm and repetition in a garden is relaxing on the eye, simplicity too brings its sense of calm and restfulness to a garden.

A garden with a little of everything in it tends to create a chaotic muddle. If there are too many things going on, your eyes struggle to take it in and the garden becomes restless and uneasy on the eye.

Simplicity in design follows the, less is more, motto of architect Mies van der Rohe, an early advocate of simplicity in design through his influence on the Bauhaus movement and championing of the Modernist movement, which allows form to follow function, to create open spaces and a simplicity of design.

We choose Lagerstroemia, commonly known as crape myrtle. This plant has a genus of around 50 species to include deciduous and evergreen trees and shrubs. In our design we decided that Tonto Crape Myrtle was the species that fit our color scheme best.

Crepe myrtles are chiefly known for their colorful and long-lasting flowers which occur throughout most of the summer right through early fall if the conditions are just right. These multiple-trunked trees and shrubs make a terrific accent to any boring sunny garden. Colors vary from deep purple to red to white, with almost every shade in between.

Although no blue-flowered varieties exist, the flowers trend toward the blue end of the spectrum with no orange or yellow except in stamens and pistils. The Crepe Myrtles first hit the states in 1790 to Charleston, South Carolina. It’s come a long way since then.

Crepe Myrtles are no longer restricted to the heat of the south. As time goes by, newer and colder hardy varieties become available they will continue to spread into cooler zones. Overall they are quite simple to grow and very rewarding with color.

Another very easy to grow plant that was chosen for this install was Golden Mop Threadleaf False Cypress. Botanists primarily know it as Chamaecyparis pisifera ‘Golden Mop’ This is the shaggy golden evergreen often seen in many landscapes because of its almost indestructible growing conditions. This plant will grow in almost any brutal sites it is placed in. It overcomes poor soil and drought. Just avoid soggy soil.

We chose the golden mop because we knew that the white fence would accent the bright yellow foliage. I love to work with color in almost all of my garden installs; and with that in mind, Chelone is another plant we chose, known by its common name of turtlehead due to its resemblance to the head of a turtle.

Chelone are native American wildflowers that favor boggy areas and the sides of streams and lakes, but can be used in a residential setting in just about any partially shaded site. Being a woodland flower, Chelone does best in partial shade, but it will grow in full sun, if the site is moist.

This late fall install was highlighted with purple and orange Celosia. Most of the flowering plants were selected for their summer bloom for that is when this client spends most of their time outside. These are just a few of the selected plants chosen to be installed in this garden. Another feature that we had accented that was already there was the rock formation placed on the hill.

It appeared to me that someone had just dropped the rocks instead of placing them as if they looked like they have been there for some length of time. Simply by placing soil around the rocks about 3 inches completely changed its appearance. This is just one of the many little things that makes a landscape design look its best.

For further information and identification of any plants in this design do not hesitate to call almost PERFECT Landscaping and let us dazzle you as we had done for this client in Tenafly NJ.